What is Sargasso and How to Avoid It?

Sargassum seaweed is an alga that washes up on Caribbean beaches, including Cancun. While it may be unsightly, Sargassum is not harmful to people and can be removed relatively easily. In fact, Sargassum is a rich source of nutrients and can be used as a fertilizer or compost.

Local authorities in Cancun are working to remove Sargassum from the beaches, and they ask that tourists and residents help keep our beaches clean.

If you’re in Cancun and see some Sargassum on the beach, don’t worry – it’s nothing to be concerned about but rather just an unpleasant experience.

Sargasso is quite an issue if you’re a tourist in Cancun. You come from another country and possibly from the other side of the world only to find yourself watching seaweed build up on the beaches.

Seaweed is basically just marine animals and algae. In fact, “seaweed” does not really describe a particular kind of species. It generally refers to plants and plant-like creatures. Some are flowering plants like seagrasses, and some are just algae.

Also known as “gulfweed,” it’s an essential part of the ocean, and it’s certainly not new nor unknown vegetation. It originally comes from the Sargasso Sea in the western Atlantic Ocean. and is known as “sargassum.”

Generally speaking, Sargasso seaweed is brown or dark green and is rugged or sticky. It is frequently attached to rocks in temperate areas, but it can also be found as free-floating algae in the open sea. Since it is free-floating, it reaches the beaches of different nations around Mexico.

While Sargassum is not dangerous and cannot cause any health issue per se, you’ll find minuscule creatures inside that can cause skin rashes.

Sargasso seaweed is now present in more than 30 countries around Mexico, such as Cuba, Honduras, Jamaica, Turks and Caicos, Belize, Guatemala, Guyana, and many more. 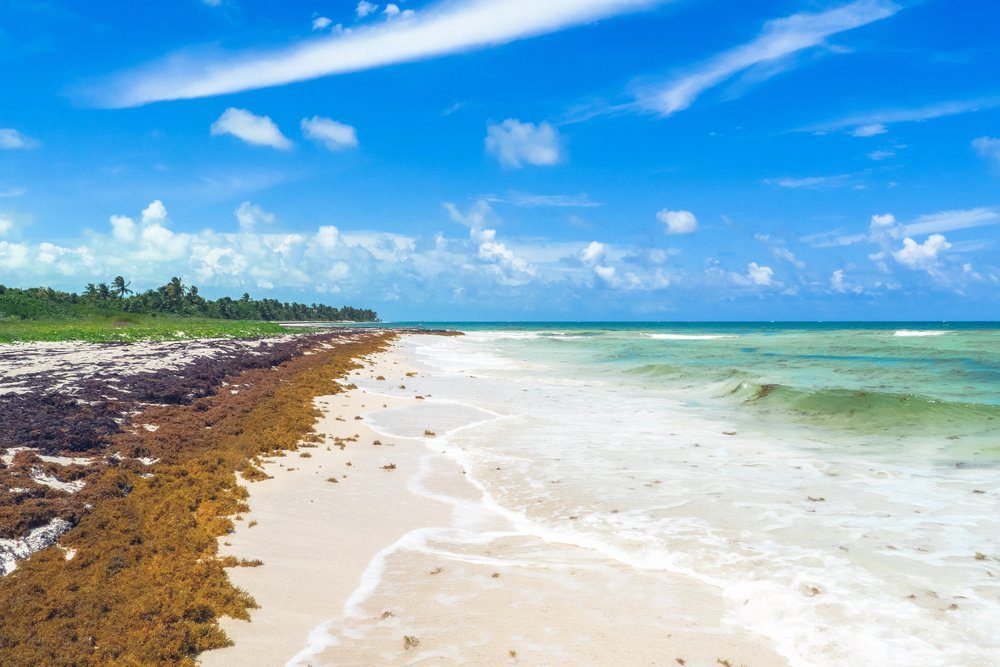 We’ve seen an increase in seaweed in Cancun, which came as a surprise for locals since it wasn’t an issue in the past few years. Naturally, Cancun, one of the most popular travel destinations in Mexico, suffers from this issue since a big part of the economy comes from tourism.

Sargasso seaweed is an increasing issue for the state of Quintana Roo, and hotels spend between $70,000 and $90,000 each every month only to fight the problem with machinery.

Although it is not toxic, the unsightly brown algae have caused severe problems for the region’s tourism industry, and we’ll go through this in the following paragraphs.

Is Sargassum Seaweed a Problem?

It goes without saying that the sudden infestation of Sargasso seaweed on the shores of Caribbean nations’ beaches represents a significant health concern.

We mentioned before that Sargassum isn’t dangerous per se in typical instances. However, after 2 days of being on beach shores, it releases highly toxic gas as part of its organic decomposition process. These chemicals are generated as a result of matter degradation. These gases can cause breathing difficulties and even neurological and cardiovascular issues.

So yes, Sargassum accumulation has devastating effects on Cancun’s tourism sector for both locals and tourists. Algae build up on beaches and decompose, producing a foul odor and rusting metals. Certainly, not something tourists would want to encounter, which will have a massive impact on the local economy in the longer term.

There’s so much preparation needed for a great vacation to Mexico, and this shouldn’t be a big issue if you choose your dates carefully, and we’ll go through that in the following paragraphs. On a side note, you need to be aware of the newly introduced $48 tourist tax in the state of Quintana Roo. It must be paid before arrival, and you can do it today with a few clicks on Visitax. 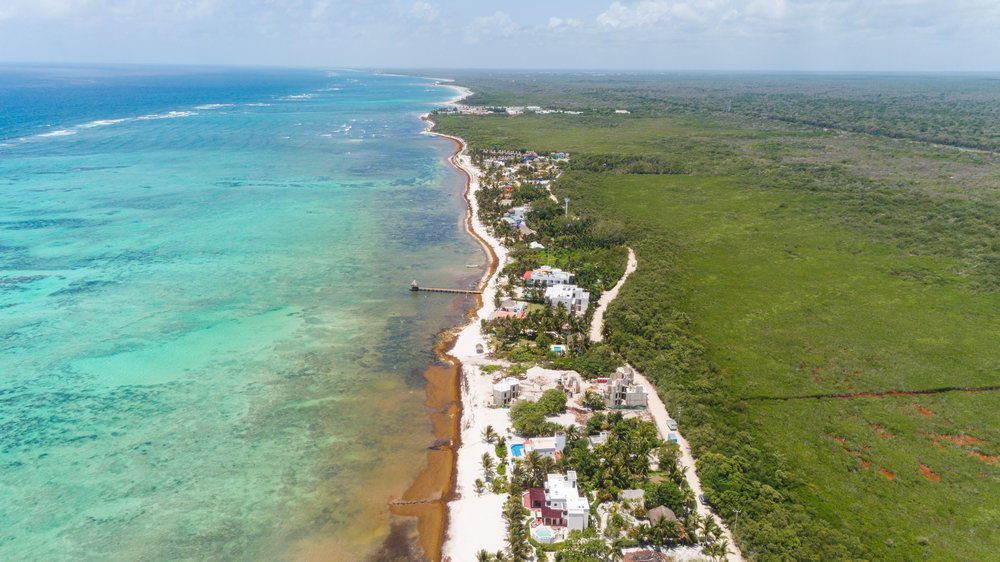 Can You Avoid Sargasso in Cancun?

As a tourist, the last thing you want is to suffer from the contaminated beaches during your vacation. But don’t feel too scared as Sargassum isn’t present the entire year. We recommend traveling to Cancun before April or after August – this period is when the seaweed starts to reach the beaches in Cancun, with July being the most affected month.

Apart from that, you’ll want to choose a property that takes well care of their private beach. Some hotels spend millions of dollars each year to fight this issue only, and these are the ones we recommend booking. Obviously, budget hotels with lower revenue will probably be more affected than luxurious properties being able to afford the machinery needed to clean the weed.

The most affected areas that you’ll want to avoid are:

All things considered, it is certainly possible to avoid Sargasso seaweed in Cancun, but you just need to pick the right dates and stay in the right place.

Is the Riviera Maya Safe for tourists? Where to Buy Real Cuban Cigars in Mexico

Bonaire with BonaireTax – the Small Island with So Much to Offer