Your Full Guide to the Mundo Maya Museum in Merida

The Mundo Maya museum in Merida is a world-class museum displaying and celebrating the most important parts of Maya culture.

This incredible building hosts an extensive collection of 1100 different artifacts that are remarkably well preserved with pieces from Chichén Itzá and Ek’ Balam among others.

The Maya were a civilization of people who lived in Central America and parts of Mexico before the Spanish arrived. In 2012, this amazing museum was inaugurated that features ancient artifacts from their culture as well as modern art exhibits.

If you’re planning on visiting any ruins in the area, this is the perfect place to know more about Mayans, whether you go before or after your tour. It has a lot more than just art exhibits up its sleeve and this is your full guide about the Mayan World Museum of Merida.

How Do I Get from Cancun to Merida?

There are different ways to reach Merida. First of all, you can jump on a bus from Cancun. The trip will last about 7,5 hours including a layover of 45 minutes. Alternatively, some fastest buses, operated by Autobuses Mayab, take 5,5 hours.

In addition, you can book a flight from Cancun, Mexico City, or anywhere in Mexico to Merida. Prices vary from $70 one way to $160+ return.

Furthermore, you can also rent a car from anywhere in the country and drive yourself to Merida. While this is the most convenient option, you need to take into consideration the road and money spent on highway fares.

Last but not least, and talking about prices, there is a mandatory tourism tax to pay when entering Quintana Roo. The amount to cash out is $38 per person no matter the nationality and you can do it in a few clicks using Visitax. How to Get to the Mayan World Museum of Merida?

The location of the Merida Museum is extremely convenient. In fact, it is located next to one of the largest convention centers, the Yucatán Siglo XXI Convention Centre.

It is also within close proximity to downtown’s bustling streets which add even more convenience. You’ll be able to have some snacks at the cafes nearby, shop for souvenirs, or grabbing an espresso as you walk around.

If you’re coming from Merida downtown, the Museum is only 5 miles away from the popular Plaza Grande.

On the other hand, if you’re willing to shop before going, make your way to Gran Plaza Merida first. From there, you’ll find the Mayan museum only 10 minutes away.

In plain words, you won’t have any issues finding the museum. If you’re downtown, we recommend jumping on a taxi or a Uber. If you’re nearby, simply have a walk around Merida to get there.

The Mayan World Museum of Merida is open from 9.00 AM to 4:30 PM from Wednesday to Monday. All foreign visitors must pay the general admission fee of 150 MXN/$7.50.

The parking costs 20MXN/$1 for 3 hours and 5MX/$0.25 for any additional hour. That said, you won’t probably need to stay more than 3 hours unless you leave your car for the day to explore the surroundings.

Of course, their opening times have been restricted due to the pandemic but we’re confident they’ll restore the regular times soon. 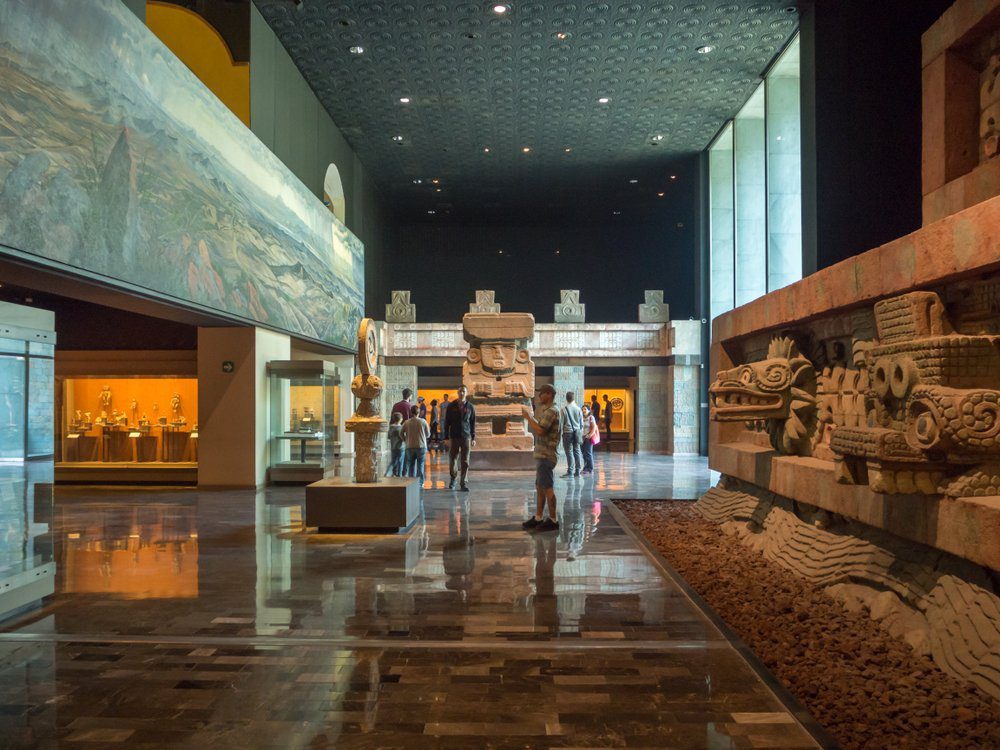 Areas and Exhibitions at the Mayan World Museum of Merida

The Great Museum of the Mayan World in Merida is a place where you can explore not only the intricate world of the ancient Maya civilization. But also how it continues to live on today.

The museum takes visitors through time from the present day back into their past by following an impressive timeline. You’ll see it start with nowadays’ life and progresses to thousands of years ago when this culture flourished.

The museum celebrates Mayan heritage through its 4 permanent rooms and temporary exhibitions. With over 1100 pieces spanning 5 centuries worth exploring, we’ll go through each room and what you can learn from them.

The museum includes projections, digital systems all around, immersion rooms, and audiovisuals, so people can get full access to the Mayan culture.

Nature and Culture of El Mayab

The Mayans have been living on the territory that nowadays covers the Yucatán Peninsula, Campeche and Quintana Roo, and Chiapas. The wide range stretches as far south as Belize with Guatemala and part of Honduras making up its border regions.

It is hard to believe that the Mayan region, with its diverse geography and plethora of wildlife, has been occupied by humans for over 3 millennia.

The dense jungles are home to mangroves as well as swamps and savannas whose rich variety in fauna rivals any other place on earth.

In this permanent room, you’ll find everything you should know about Mayan geography and get an introduction to the Mayan culture.

The Maya are not a homogeneous group in the way that many might think. In fact, the peninsular region is home to many different cultures, and this diversity carries over into their languages and customs as well.

The peninsular Maya were physically and culturally related people. Throughout the years, all of the communities adapt their mother tongue and inflections to then become the Maya they are today.

The Mayas of Today (or Mayas de Hoy, in Spanish) is a permanent room where you’ll learn what the Mayas are and what they took from the ancestral communities.

The Mayan culture was turned upside down by the invasion. The Spanish domination decimated their population, forced them to comply with yearly tax requirements, and destroyed countless remnants.

Also, diseases spread rapidly due to a lack of immunity developed over centuries without contact with outsiders. For this reason, Mayans were, back in the days, more fragile.

In this second room, you’ll get to know how the ancient Maya lived, how their culture changed throughout the centuries and the impact on today’s habits.

The ancient Mayans offer more than just a lesson in history. They faced many challenges and overcame them. They preserved their traditions the best possible way to this day.

The story of these resilient people is one we should not forget because it offers insight into how to live life interacting with nature without destroying what’s around.

This last room will take you around the whole ancestral Mayan system and how we can apply it to our lives to be more considerate.

On top of the 4 permanent rooms inside the Mundo Maya museum in Merida, there are also temporary rooms that deserve to be seen.

The culture, biology, and social values revolving around this important part of Yucatán’s intangible cultural heritage will be explored. These temporary exhibitions will teach you some specific subjects such as the hacienda system or even the agro-ecological system.

If you’re willing to learn as much as possible about the Mayan world and culture, we advise you to plan your trip around their calendar. 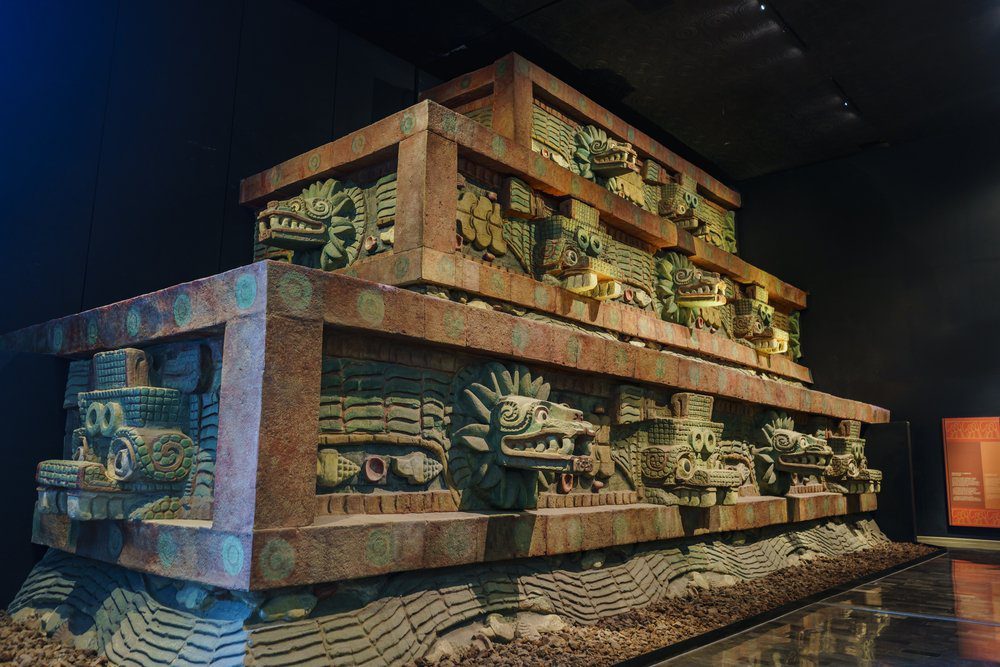 How Long to Spend at the Mayan World Museum of Merida

While the Mundo Maya museum in Merida is big with multiple permanent rooms, you should be able to complete your visit in no longer than 2 hours.

All in all, considering all the videos, the different and temporary rooms, and the explanations from the optional guide, 3 hours should be the maximum spent here.

Key Points About the Mundo Maya Museum Before Going

In addition to the rooms and history features, there are some key points that are important to write down before visiting the museum.

First of all, most of the signage in the museum is in English so that you won’t struggle the understand anything. Secondly, you can get a guide to get a deeper understanding of the history, but it’s not mandatory and you’ll probably get the idea by yourself.

Last but not least, we recommend visiting the museum in combination with a tour to an archaeological site around Yucatan.

Our Take on the Mundo Maya Museum in Merida

The Mundo Maya Museum is a beautiful space full of knowledge and culture, which has been preserved for generations.

As the only museum in Merida, it’s one not to be missed if you’re visiting this historic city with its Spanish colonial architecture and cultural tradition.

In conclusion, the Mayan World Museum of Merida is a great place to go for visitors that want an introduction and some education about the history of Mayan culture.

How to Get to El Cielo Beach in Cozumel (+ Snorkeling and Tours) What Covid Vaccines are Approved and Accepted in Mexico?